Contribution to academic movement #flyingless
In May 2019, we decided to act upon our research concerns and drive to a meeting of the Resilience Alliance in Helen, Georgia (USA) instead of flying. The McGill Office for Sustainability put a little clip together to kick-off their #BecauseIDidntFly campaign.
Collecting fish samples with the beam trawl
A film by the Canadian Foundation for Innovation about Marianne Falardeau's research
Find out more about research on the CCGS Amudsen and Marianne's research on this interactive map.
﻿NSERC Science, Action! Video﻿
a film by Ira Sutherland
This film was made by Ira Surtherland as part of NSERCs 'Science, Action!' 2015 competition, where it won 1st prize.
Substance P + Atomic #15
Filmed by Alexis Aubin & edited by Adrienne Surprenant

Geneviève Metson, choreographer and dancer in this video, was a member of the Bennett lab until 2014 when she completed her PhD.

This film, made by Sam Quigley, was made to support McGill Net Positive, a project we worked on to discuss the need for a 'green' space at McGill. Read more about the project here.
​

Participatory Scenario Planning in the North
Our Future - Hivunikhavut 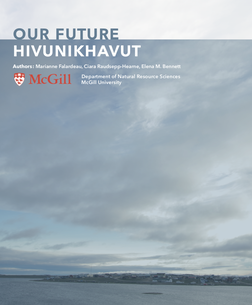 Read the report to learn more about the scenarios and the approach used to develop them:

Watch the film "Hivunikhavut - Our Future" we made about this project:

Pathways to improving people-nature relationships in Bristol and Pontiac, Quebec

This research project worked to improve understanding of the many ways people currently benefit from nature (e.g. clean air, hiking, hunting, sense of place, etc.), how they would ideally like to benefit from nature in the future, and how exploring that with community members can inform management of multifunctional landscapes that achieves improved people-nature relationships.

In the fall of 2018, we publicly released a survey on this topic for people who live in the municipalities of Bristol and Pontiac, in the province of Quebec, Canada. You can check out a poster that talks about some of the survey findings here (aussi disponible en Français).
In February 2019 we organized a participatory workshop that brought together community members and relevant stakeholders to brainstorm ideas for actions that could be taken to improve people nature relationships. Find out more about our process and project outcomes in this report. ​