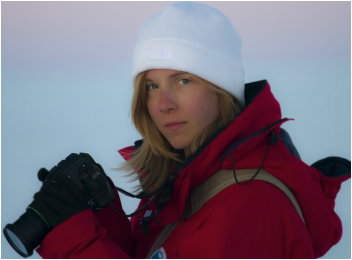 ﻿﻿The Arctic represents something unique in each of our minds. This frozen world, crucial habitat of emblematic species, feeds the imagination of kids, and still constitutes a mystic place for many adults. But most people are so far removed from North Pole that they are uninformed of the major issues reshaping its face. The Arctic is a bellwether of climate change, where the effects of global warming are at their most intense. The ice cover is rapidly diminishing and might completely disappear in summer within the next decade, with cascading effects on ecosystems. Moreover, oil and gas industries are shifting their focus towards the Arctic Ocean that contains more than 20% of the planet’s remaining hydrocarbons. Mining industry is also growing rapidly all around the Arctic Circle, while shipping is increasing due to these proliferating industries and the opening of the Northwest Passage.

The Arctic has long fascinated me, and I am interested in understanding how increasing pressures may trigger various and potentially synergistic impacts on marine ecosystem services and human well-being. Indeed, Arctic marine ecosystem services are crucial for the well-being for people in- and out-side the Arctic. For instance, it provides food to many Indigenous communities who depend directly upon the marine wildlife for subsistence and economic activities, while its cooling effect on the Earth’s climate benefit all societies.

In my Master’s thesis, I studied how climate-related invasions of boreal fish species in Arctic waters could lead to rapid changes in the marine food web. These findings raised many questions to my mind about how changes in the Arctic marine ecosystem unfold. Do they interact? If so, can they cause social-ecological feedbacks? What are their implications for northerners? To answer some of these questions, I developed an interdisciplinary PhD research to study the Arctic marine ecosystem and the benefits - or ecosystem services - it provides to northerners in the context of environmental changes. Arctic change will have ecological and social impacts that can interact in complex ways. To untangle those interactions, I am using adapting an integrated social-ecological approach to the Arctic context.

In addition to communicating with other scientists, I frequently engage the public on these issue. I hope to contribute to increasing public awareness about the important issues surrounding the Arctic and their implications in and outside the Arctic.